New book gets a laugh out of unfortunate domain names. 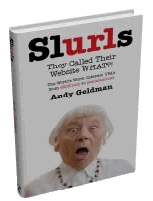 I first became amused by domain names with double meanings when a now-defunct domain name blog put together a list several years ago. One example on that blog was TherapistFinder.com, which, when not capitalized, looks like TheRapistFinder.com.

This sort of double-meaning domain name is what computer programmer Andy Geldman calls a Slurl. And he’s taken Slurls to the next level in his book Slurls: They Called Their Website WHAT?

My first thought when I read the preview for this book was “how do you create a 185 page book out of a handful of slurls?” Geldman manages to do it using his own commentary and humor on each domain name. And, aside from some British humor (is that humour?) that I don’t understand, his book is an enjoyable read.

To be sure, it’s light reading. And you need to put yourself in the mindset of a middle school boy before you read it, since most slurls are quite juvenile in nature (fredshatblocks.com or speedofart.com, anyone?).

Slurls breaks new slurl ground in domain hacks and country codes. What URL did Swiss chip manufacturer choose for its web site? Swissbit.ch, of course. There’s also the Cook Island’s .ck. Like many countries, Cook Islands decided to go with three second level domains for its TLD: .edu.ck, .gov.ck, and .co.ck. The latter one created some problems, so they stopped registering domains under .co.

Even some of the new TLDs are chastised. Consider Research In Motion’s (RIM) .jobs site. I’ll let you look that one up.

So if you’re in a fun mood or looking for some beach reading, pick up a copy of Slurls. Just be aware that the content isn’t for kids, especially those at Dallas-based Children’s Laughter Foundation. You can find them online at childrenslaughter.com.