A look back at two years of Bido.

Now that I’ve had a couple days to mentally process the closing of Bido, it has given me time to reflect on what went wrong.

To be clear, I commend both Sahar and Jarred for creating Bido. They put their heart and money into it, and should be proud of the innovation they brought to the marketplace. I also think we’ll see the platform live on in some incarnation as they are currently liquidating the assets.

So here are my main reason the site “failed”: feature bloat and too many changes.

Let me take you back to June 2008. Bido launched and offered a simple premise: 1 auction a day starting at $1 with no reserve. Technically there was some sort of reserve because Bido guaranteed a certain price to the seller and was able to place a bid. Just a few weeks later Bido dropped this “guarantee” price.

Bido was really simple, but there was a problem: selling one domain a day doesn’t make for a very good business model. As I wrote in July 2008:

One question I have is how it will make significant money for its founders. Let’s say Bido sells 365 domains a year at $5,000 each (and these aren’t “house listingsâ€). At a 10% commission (I believe they are starting at 8%), that comes out to only $182,500. That’s not enough to justify the cost of developing, marketing, and running the service. Bido either needs to offer more that one domain a day, increase the average selling price to mid-five figures, or treat Bido as a loss leader to promote other services.

After having some technical problems, Bido then went offline between August 2008 and February 2009.

When it relaunched it had some successful auctions but ran into another problem: poor inventory. It bottomed out with a domain that sold for $2, which really brought that business model problem back into the spotlight. These low sales prices scared away sellers who didn’t want to list domains for $1 and take the risk that they wouldn’t sell for a good price. So Bido introduced reserve pricing.

Since the one-auction-a-day didn’t make for a plausible business model, the company decided to allow more than one domain a day.

A multiple-auction-per-day format made sense and would have worked. That’s when the feature bloat started. It seemed like every week the company was adding multiple new features. Too many to keep up with as a typical user. Many features didn’t seem to be thought through, as they would be introduced and then changed shortly thereafter.

It got to the point that a platform that was once brilliant in its simplicity suddenly looked like this: 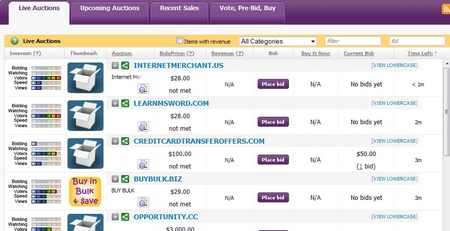 New users were scared by the complexity. Submitting a domain had too many options. It was confusing and the quality of inventory suffered. Bido became the place to dump your reg fee domains. And selling domains for under $100 takes as much time as selling one for $10,000 for the platform. It was a money-losing proposition.

But Bido should be commended for pushing the envelop. In an industry where marketplaces take a while to innovate, I think we’ll see some of Bido’s features pop-up on other platforms over the years. (And perhaps on the “new” Bido.com.) Here are some:

2. Social interaction – right now there’s little you can do to interact with other buyers and sellers at most domain marketplaces. Bido enabled chat and commenting on domains, which resulted in a group of domainers making Bido a focal point of their day.

3. Wisdom of the Crowds – Bido creating a “bid for profits” system where you voted for domains you thought would sell. This was a great way to tap the wisdom of crowds to select the right domains for auction.

Again, my hat’s off to Bido. Some drive-by detractors have flamed the company; but these commenters have probably never tried to create a company from scratch. And good luck to the Bido buyer — please keep the spirit of the site alive.

Interview with Jarred Cohen of Bido