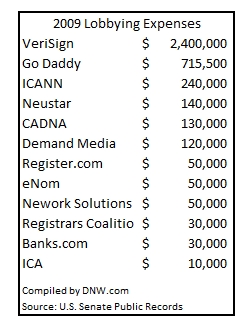 Using public records filed under the Lobbying Disclosure Act, Domain Name Wire has tallied total spending for 2009 by a number of companies. (See spending in the first half of 2009 here.)

VeriSign led the pack, spending $2.4 million to influence matters related to Domain name addressing, internet taxation, phishing and email legislation. In second place was Go Daddy, which spent $715,500 on a number of matters. In the second half of the year it focused on targeted online advertising and deep packet inspection.

With ICANN working to gain further independence from the U.S. government, the non-profit spent $240,000. It describes some of its interests as new gTLDs, “independence from UN/ITU/government capture”, and “post-JPA cooperation with USG”.

Neustar spent $140,000 on matters including those related to ICANN. Coalition Against Domain Name Abuse spent $130,000 compared to the $10,000 spent by Internet Commerce Association.

Both Demand Media and its eNom spent money on lobbying, totalling $170,000 between the two. eNom spent its portion on “Providing information to Congress regarding generic top level domain names.”

Banks.com spent $30,000, including on issues of “Treasury Department Symbols”. This should come as no surprise, since the company is fighting to hold onto its IRS.com domain name.