Google trying new ad formats — could they land on a parked domain near you?

During the past two quarters Google has been rolling out a number of new ad formats for search ads on Google.com. On yesterday’s investor conference call, the company explained a few of them.

Site Links – these came online in Q4, and basically deep link to sections of an advertiser’s web site. For example, here’s an ad for Toys R Us:

Product Links – ads for specific products might show pricing and pictures, such as this one for “HP All in One Printer”:

Video Ads – these expandable ads show videos directly within the Google.com ad. Here’s an example when you search for the new movie “The Losers”: 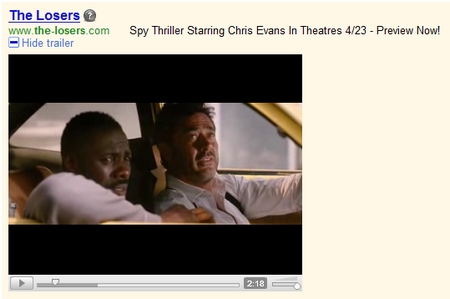 Of course, the company also is testing lead generation ads.

Also on the call, Google explained that it’s getting more involved with cost-per-action. Some e-commerce stores will provide Google with their product list and pricing, and then turn over advertising to Google. Google chooses when and where to display ads, and then gets a cut of sales — much like an affiliate program. It’s kind of like affiliate arbitrage for Google, except they get to bid on trademarks whereas most affiliates can’t.

Obviously Google is trying these new ad formats because they boost revenue. Could that translate into more ad options for Google Adsense, including the parking channel? That could be a big boon. Right now most parking programs that display photos of products use a Shopping.com feed. A Google feed might produce better results. Showing videos and specific product links could also boost revenue on parked domains.

Seeing these ads on parked domains is obviously a long way off. But there’s potential.