The percentage of people rating ICANN’s performance as “Good” has hit its lowest point since Domain Name Wire started its annual survey five years ago.

In the fifth survey, including responses from over 500 people in the domain name industry, only 12% rated their satisfaction with ICANN as “good”. That’s down from 33% in 2006.

The survey involved participants in 49 countries. Most survey takers were domain investors, but also include domain name registrars and other service providers.

Part of ICANN’s challenge is that major policy changes and disputes tend to turn warring sides against ICANN in addition to each other. A major stumbling block lately has been the much delayed rollout of new top level domain names (e.g. .NYC, .Music). ICANN originally planned to accept applications last year, but delays have mounted as trademark interests and other third parties have weighed-in. 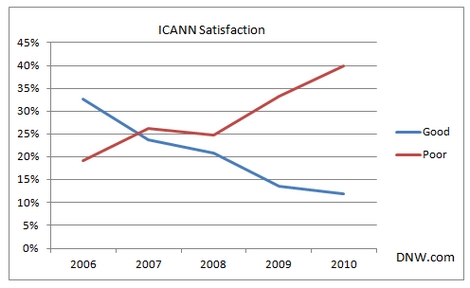