This case was over before it even began. 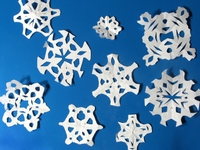 I was scratching my head when I saw that someone had filed a UDRP against the owner of PaperSnowflake.com. Who in the world would go after a generic name like that?

We now have the answer, but I’m still scratching my head.

Patricia Kelley, who owns PaperSnowflakes.com (plural), filed the case. She operates a web site that instructs people on how to create paper snowflakes. With the help of counsel, she tried to argue that she had common law rights in Papersnowflakes.com, and that the singular version was confusingly similar.

The panel didn’t buy it, and Kelley didn’t even meet the first requirement to win a UDRP.

What’s amazing to me is that the owner of PaperSnowflakes.com apparently offered to sell the domain to Kelley for $2,000. That’s a great price, and the domain would probably fetch at least that much on the market. It’s also probably less than what she spent filing the UDRP and hiring a lawyer.

The respondent asked for a finding of reverse domain name hijacking. Panelist Alistair Payne neglected to consider the issue.