Successful and enjoyable conference comes to an end.

Yesterday started with a couple panels in the morning, followed by an afternoon of wave runners, snorkeling, bike riding, and scooters. After an afternoon in the hot sun, attendees walked over to an oceanfront restaurant for a steak and seafood dinner (see picture below, courtesy of Bill Sweetman of Tucows).

After dinner guests went to a 1920s theme party back at the resort, complete with flapper and burlesque girls. The party went until one in the morning, but many people weren’t ready to call it a night. About 20 people put on their swimsuits and went for a night swim in the ocean, followed by a dip in the pool.

This morning I was on a panel with Ron Jackson of DNJournal and representatives of registries Neustar and PIR to discuss new top level domain names.

A number of people are staying for the weekend, but I’ll be heading to the airport shortly. Hopefully my trip home won’t be as adventurous as the one here. 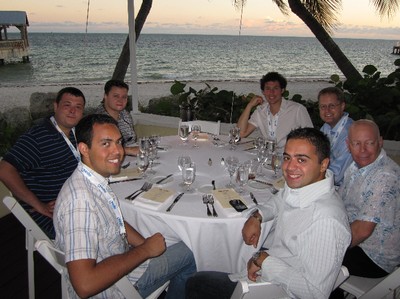