Analysis shows over $2M spent in first half of year on lobbying. 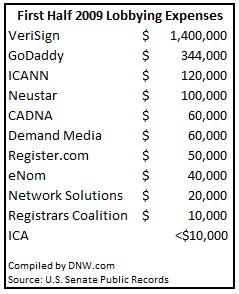 By far the biggest spender is VeriSign (NASDAQ: VRSN), which spent $1.4M in the first half of 2009 on “Domain Name Addressing, Data legislation, Authentication Internet Content Legislation, Internet taxation, Internet e-mail legislation, e-commerce, pfishing legislation (sic)“. However, this number is down from last year when the company spent nearly $3.8M for the full year.

The next biggest lobbying force on Capitol Hill is GoDaddy, which spent $344,000 during the first half of the year. GoDaddy is trying to influence a number of issues, ranging from new gTLDs, the ICANN Joint Project Agreement, targeted online advertising, trademarks and copyrights, patent reform, and whois database privacy.

GoDaddy also formed a lobbying organization called “Internet Domain Name Registrars Coalition” along with Network Solutions and Oversee.net (Moniker) this year. (Update: Oversee.net is no longer a member of this group.)

With a number of big spenders trying to influence internet governance policy, the Internet Corporation for Assigned Names and Numbers (ICANN) is also involved. The non-profit spent $120,000 so far this year for “Internet governance issues including new gTLDs, consumer protection and domain name competition, security and spam, independence from UN/ITU/government capture, post-JPA cooperation with USG, cybersecurity and accountability/transparency. Policies regarding the oversight of Internet’s naming and numbering systems. S.773, Cybersecurity Act of 2009.”

Coalition Against Domain Name Abuse (CADNA) and Internet Commerce Association (ICA) continue to invest in Washington. CADNA spent $60,000 to tackle issues related to cybersquatting and ICANN. Some of CADNA’s members also do their own domain name lobbying, including Intercontinental Hotels Group. ICA pulled back this year, spending less than $5,000 each quarter on lobbying.

Other organizations also spent part of their lobbying budget on domain name issues, including HP and United States Chamber of Commerce.