Complainant tries to pull a fast one on arbitration panel.

Today I was reading through the domain arbitration decision for ComPart.com, a domain owned by Vertical Axis. The complainant, a German company called Compart, said that the parked page at Compart.com was showing ads related to its software business.

The complainant specifically said the parked page showed ads of direct competitors, such as software4students.co.uk and 31touchdownloads.com. That would be pretty damning evidence against Vertical Axis.

But then I went to compart.com to see these ads, and here’s what I saw: 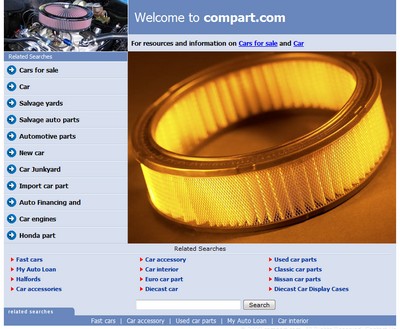 It sure appeared that the page was focused on the “part” portion of the domain, as it only showed ads for car parts. Confused, I looked up historical thumbnails at DomainTools and found the same thing. Where could these ads competing with the complainant, that Vertical Axis supposedly set up to divert traffic from the complainant and benefit from its goodwill, be?

Turns out Compart’s lawyers pulled an old trick. They merely typed the word “software” into the search box at the bottom of the parked page and printed out the results page.

This didn’t go unnoticed by the panel, which called the complainant out on it.

(The panel also thought the respondent tried to mislead them because it asserted that compart was both an English and German word, but it is not a German word. I checked with the respondent’s attorney. As it turns out, the assertion that compart was also a German word was due to Google Translator showing the word during a translation. If Translator can’t find the word, it just renders it in the same language. Regardless, intentionally misleading the panel like the complainant’s counsel did is very different from a trivial oversight such as which languages ‘compart’ is a word in.)