The main source of funding for Internet Corporation for Assigned Names and Numbers (ICANN) doesn’t get the attention it deserves.

In my open letter to new ICANN CEO Rod Beckstrom, I made made a key point with regards to domain registrants:

It’s a fairly simple idea, but here’s a flow chart. 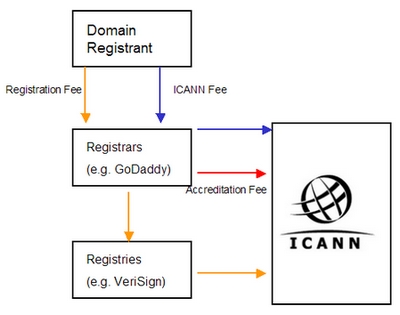 The orange line are registration fees. Registrants pay the fee to a registrar, such as GoDaddy. GoDaddy then takes some of it as a profit and passes the rest to the registry, such as VeriSign. VeriSign then keeps some of this as a profit and passes the rest on to ICANN. In practice, some registries have fixed fee agreements with ICANN, which only bolsters the amount they keep in their own pocket.

The blue line represents the ICANN fee charged directly to registrants and passed on from the registrar to ICANN. Some registrars include this in the registration fee; others break it out.

The red line represents accreditation and annual fees paid by the registrar to ICANN. Some of these fees correspond to the number of domains registered. Ultimately, it comes out of the registration fees (blue line) paid by registrants.

As you can see, all of the money comes from the domain registrant. The middlemen take a cut and pass the rest along to ICANN. If the registrant goes away, ICANN basically has no money.

But domain registrants often feel like they are an unheard voice at ICANN. One example could be found at yesterday’s ICANN new gTLD/trademark event in New York City yesterday. Phil Corwin, general counsel for Internet Commerce Association, noted a missing check box on an evaluation form distributed at the event:

…at the bottom of each page was a line reading “my interest in this matter is defined by my work as/with a:â€ followed by a long list of possible connections, such as registry, registrar, or large corporation – but, remarkably, with no listing for “registrantâ€ (other than the catch all “otherâ€). ICANN thus continues its tradition of failing to perceive the existence of registrants, as is demonstrated by its finance dashboard which shows in bar graph form that ICANN receives the vast majority of its funding from registrars and registries, but apparently not a single dollar from registrants who fail to get any bar (even though they supply nearly all the money that flows through ICANN’s contract partners). Registrants to ICANN are seemingly like plankton to Moby Dick.

To be fair, domain registrants in general have failed to form a cohesive voice, save for the business constituency and an under-funded Internet Commerce Association. But that doesn’t mean ICANN should push forward policy that ignores the registrant community’s voice.