A statistical look at a slice of the domain name market.

Most people agree that the investor aftermarket for domain names isn’t as lofty as it was a couple years ago. Just look at the mood and total sales at live domain auctions for proof. But gathering data to prove this is difficult.

Richard Wixom of DNSalePrice recently took at stab at it, but with a different conclusion: the domain aftermarket is doing just fine, thank you. The drop in domain prices over the past year or two is small compared to the drop in the stock market. At least for three character domains.

Wixom took a narrow band of domain sales that he believes creates a good proxy for the investor market overall: three character domain sales under $30,000. He charted sales from January 2005 to May 2009, stripped out domains with q, x, y, or z, IDNs, and three letter domains that are words. Wixom then plotted these sales on a graph, added a polynomial trend line, and overlayed the Dow Jones Industrial Average. The picture tells the story: 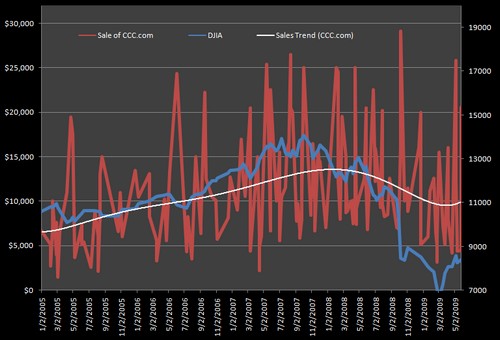 This doesn’t present enough data to suggest a 50% drop year over year, but you don’t need numbers to tell you that the investor resale price of three letter domains has fallen this year. I think it has bottomed out.

Businesses Continue to Buy and Use 3 Letter Domain Names

At what price would it make sense to sell the DNW.com domain name?