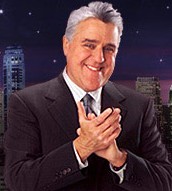 Comedian Jay Leno has filed claims with World Intellectual Property Organization to get three domain names: jaylenoshow.com, weeknightswithjayleno.com, and thejaylenoshow.com. Now if only he’d do something with JayLeno.com, which he picked up last year.

JayLenoShow.com’s whois record is protected by domain privacy and is parked at HitFarm. Weeknightswithjayleno.com is owned by a Wisconsin man. A phone call to the phone number in whois for the domain name went to a voice mail recording for a roofing company.

TheJayLenoShow.com is registered to real estate agent Javier Zambrano in Katy, Texas, and the domain name forwards to his real estate web site.

Contacted by phone this morning, Zambrono said he’s going to fight the claim in arbitration. He says the domain name doesn’t bring him any additional real estate business.

“Nobody looking for homes is going to go to that domain,” said Zambrono. He claims there was no trademark on the name when he registered it.

Leno’s employer and NBC parent company GE picked up the domain name JayLeno.com last year from Anything.com Ltd., the same company that coughed up JerrySeinfeld.com when comedian Jerry Seinfeld realized he wasn’t really master of his domain. (No arbitration was filed for JayLeno.com, so the circumstances of the transfer to GE are unknown.)

The kicker: GE hasn’t done anything with the domain name nor its nameservers, and it still resolves to an old “unofficial fan site”. Even more humorous is that NBC’s web site rates Jay Leno fan sites. One of the sites it rates is JayLeno.com.

Someone should teach GE how to set up domain forwarding.