On Sunday morning, I opened up the sliding door to my first floor room at Catamaran Resort in San Diego and saw this: 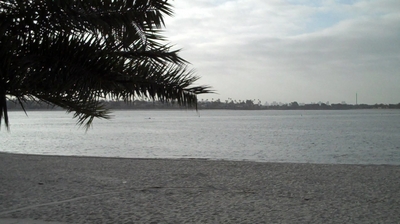 The vista made me think about how “different” the GeoDomain Expo was to other industry conferences. It was held away from the city and away from a high rise hotel. Lunch and drinks were served on the beach. Panels and sessions were packed with people taking notes and learning. Speakers weren’t limited to the domain industry; many were in tangential fields that could relate to GeoDomains.

That’s not to say it all went off without a hitch. Saturday’s domain auction was intersting. The resort booked a wedding on the other side of the lawn, so the auction was done without a microphone to disturb the wedding. And the Geo crowd has always been into development rather than domain trading, so buyers were few and far between. At last year’s conference only two people were responsible for the majority of sales, and they weren’t in the buying mood this year.

For me personally, it made me realize how big the opportunity staring us in the face is. Now is not the time to retreat, it’s a time to be disruptive.

It will be interesting to hear about the TRAFFIC conference kicking off in Silicon Valley today. Few people at the GeoDomain show said they were making the trip, save for service providers. TRAFFIC organizers have admitted that the show won’t be as big as in the past. To be sure, there will be news at the conference. Check back here tomorrow morning for the first announcement.

For those of you that missed the show, enjoy this view from the Executive Suite at the GeoDomain Expo: