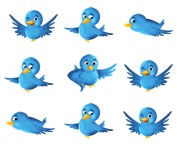 Sure, Mystery Domain Auction shut down and no one has been able to replicate the success of the original Million Dollar Homepage concept. But one entrepreneur is trying his hand at raising $1 million through Twitter.

1MillionTweets.com charges users $1 to submit a tweet through it’s account. It hopes to sell one million tweets to people trying to advertise their services and web sites.

It may work, if people follow @1milliontweets on Twitter. It just launched this morning and has 178 followers so far. Within hours it had 16 paying tweeters. A little bit of media buzz could get this thing going. 10% of the proceeds will be donated to charity.

The site is the brain child of entrepreneur and domain broker Blair Cummins. I met Cummins out in San Francisco a few years ago, and he helped me flip a domain I bought at BuyDomains for $5,000. (He sold it for about $25,000.)

And, as any savvy domainer would do, Cummins has also registered OneMillionTweets.com.