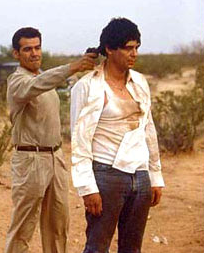 I’ve written before about the dangerous situation in Mexico. But I realize a lot of people in the industry are still heading down to Mexico City next week for the ICANN meeting. So I reached out to former co-workers who travel to Mexico City to get their tips on staying safe.

The attitude ranged from “stay the heck out” to “just be smart and you’ll stay safe”. I’ve compiled some of their responses in an effort to provide practical advice.

After reading my former coworkers’ responses, I realized that the most danger you’ll experience is getting to and from the hotel and airport, because you’ll likely take a cab. Here’s some cab advice:

“I always sit in the front seat with taxi drivers. Use hotel and airport cabs. For $20/hr a cabbie will wait, so often I’ve paid them to just sit there and read the paper so that I’m sure to have a safe way home.”

“Never hail your own cab. Always ask your hotel, club, restaurant or company you’re visiting to call someone they trust. When the driver arrives, make sure whoever called for you authenticates the driver.”

“NEVER pick up a cab on the street, many of them are fake and will hold you up. If you need a cab, go into a hotel lobby and ask them to call one, which they will readily do even if you’re not staying there.”

“Never drive in a car with your windows down. Always lock your door, wear a seat belt, when possible, and keep your body parts inside the vehicle.”

“a sales engineer from one of my previous companies was held up at gun point while in a cab in Mexico City so it’s important to keep your eyes open and not have a bunch of flashy stuff on you when you are away from the hotels. ”

OK, so you get the point. Be careful with the cabs, and try to travel with someone else.

Here are some other points of advice:

“Travel with locals…Dress casual, no flashy watches, jewelry. I wear jeans as much as possible…just try to be as cool and confident as possible, no cameras or unneeded conversation… look like you belong, not a tourist.”

“Was down in Mexico city in connection with the deteriorating security situation which is grim. There are travel advisories within the government organizations I work with to avoid the border towns and Mexico city…Move around the city with someone local to Mexico city and who is fluent in the local dialect, if that is an option. It is very easy to spot an out of towner or a foreigner based on the accent even though they may be speaking Spanish.

“Carry a map and familiarize with route and landmarks to and from location before heading out. Make mental note of distance and time it would take to get to destination. Watch for observers idling about hotels and places with lots of tourists.

“I know this may seem paranoid, but these are some basic precautions. If they are going to target you assume they will. And part with the belongings quickly rather than antagonize the attacker leading to further harm. Just not worth it fighting back. Walk away from the assailant and do not try to follow – there are always accomplices. Get back to a secure location before calling for help.”

Of course not everyone is as concerned. One colleague, who is fluent in Spanish, says to be smart but not sweat the small stuff. Although knowing the language helps, he said his white friends can do just fine:

“Walking around during the daytime is fine. Everyone does it. However, be cautious at night and never walk alone, if you have to. Downtown and Santa Fe are generally safe, but always be vigilant of your surroundings.

“Chapultepec has outstanding, safe running trails. It’s the only large green space you’ll find in Mexico City. Every driver knows where it is. The parks are great and the Zoo is world-class.

“Do not give money to the homeless and do not buy from them. Sadly, charity makes you stand out as an “estranjero” (foreigner) and could make you a target.

“Tone down your dress. Don’t wear bright sneakers and bright socks. Don’t wear around a tux. Suits are very common, especially in the business areas, so they’re a great way of blending in with the crowd.”

One other person is putting together a list of tips for me. He travels to Mexico City extensively with a security detail, and will likely have some good suggestions. I’ll update this post when I hear from him.

Odds are everyone will travel safely next week. But please be careful.

The Week Ahead in Domain Names