Japanese find ways to navigate web even before IDNs.

In an article titled “Domain names? We don’t need no domain names”, IDG News Service writer Martyn Williams explains how the Japanese use the search box in lieu of domain names.

Instead of typing Google.com into their browsers, they search for Google at Yahoo.

On the Yahoo site they type in “Google” to get taken to the home page, bypassing the address bar in their browsers and registering another search for Google in Yahoo’s rankings. In 2008 so many surfers used Yahoo to get to the Google home page that it placed as the fourth most searched term of the year — a position it also held in 2007.

Advertisers in Japan often don’t include a domain name and instead show a picture of a search box with the desired search term in it in Japanese. (I think I’ve seen a picture of this on a domain blog before but can’t find it.)

Apparently this originated because of lack of internationalized domain names where Japanese characters could be used. It was a pain for broadcasters to spell out every letter of an English-language, latin-character domain name.

Update: Here’s a photo from a reader: 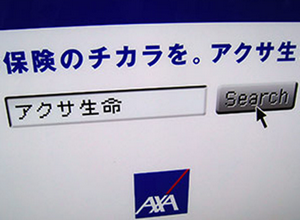