Ad in The Economist likely the first of many.

As I finished the Christmas Double Issue of The Economist, I flipped through the final pages of ads and was surprised to see this: 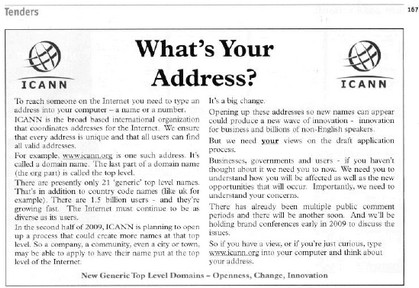 Internet Corporation For Assigned Names and Numbers (ICANN) promised to do mainstream marketing for the launch of new top level domains, and this is the first ad I’ve seen.

I hope ICANN takes into serious consideration the 317 comments it received from people who reviewed the new TLD application guidebook. If ICANN ignores key points — such as trademark concerns and registry agreements — it could darn well have a mutiny on its hands.

Judging from the comments, few people have faith that ICANN can pull off such a massive expansion of top level domains at once. And few people believe these will actually add competition to the top level domain space. As the U.S. Department of Justice and Commerce Department pointed out, none of the previously launched TLDs has challenged .com. The proposed process for new TLDs does not create registry-level competition to offer a good deal to consumers, either. Another big concern is how ICANN seems to be jumping into policy making and morale issues with the new TLDs.

I’m curious what role bonuses and job security at ICANN play into the organization’s decisions, especially if it pushes forward so aggressively with its new TLD plan. We know that new TLDs will add job security as the organization will grow exponentially. As for bonuses, there’s also a clear link to a number of ICANN employees. They get bonuses based on meeting their goals and objectives. If you’re involved with new TLDs and they don’t launch, your bonus will likely be affected. Executives get bigger bonuses. VP of Corporate Affairs Paul Levins, General Counsel and Secretary John Jeffrey, and SVP of Services Kurt Pritz can each earn up to 30% of their base salary as a bonus. I wouldn’t be surprised if revenue growth is part of the bonus structure.

If ICANN pushes forward aggressively, the internet community should consider if ICANN is ready to disengage from the U.S. later this year.