Scottsdale, Arizona based The Go Daddy Group, which runs the world’s largest domain name registrar GoDaddy.com, is warehousing its customers’ expired domain names and profiting from them. The company has taken a number of steps to hide this practice from public view. This article covers the results of a Domain Name Wire investigation into GoDaddy’s domain warehousing activities.

GoDaddy.com and other registrars that are part of The Go Daddy Group don’t use a partner to sell customers’ expired domain names. Instead it auctions them on the company’s own platform originally called The Domain Name Aftermarket (TDNAM). It’s a fairly transparent system. But when a valuable domain doesn’t sell, something not-so-transparent goes on in the background, as described in detail below.

It’s not unique that GoDaddy profits from expired domains. What’s unique are the steps GoDaddy takes to cover up its tracks, that it holds on to some domains that aren’t sold at auction, and its apparent hypocrisy between domains it owns and some of its activities such as combating online pharmacy fraud.

Go Daddy’s Domain Name Warehouse
I first discovered GoDaddy’s domain warehousing efforts in 2005. I noticed a typo domain name that didn’t sell at TDNAM and wasn’t released. It was subsequently monetized by GoDaddy using a domain parking page. At the same time I purchased several domains on TDNAM that had expired but hadn’t sold in the initial auction, much like the typo. Interestingly, I received notification from an email address at StandardTactics.com offering to transfer all of the domains I purchased into my account.

Standard Tactics, LLC, is a The Go Daddy Group subsidiary that takes ownership of valuable expired domains that don’t sell at TDNAM. It then monetizes the domain names using parked domain pages and lists the domains for resale on TDNAM.

The Formation and Structure
When GoDaddy launched TDNAM back in 2005, it finally started cashing in on its customers’ expiring domain names. By auctioning off the domains it was able to generate revenue even when its customers didn’t pay to renew their domains. But GoDaddy understood it could also make money by keeping some of the domain names that didn’t sell at auction for itself.

On August 16, 2005, GoDaddy formed a subsidiary called Standard Tactics, LLC in New Mexico. Before founding Standard Tactics, all of GoDaddy’s subsidiaries were incorporated in Arizona where the company is headquartered. There are a couple reasons GoDaddy may have chosen to form the company as a New Mexico limited liability company rather than an Arizona corporation. First, by creating the company in New Mexico it could distance itself from it. Second, by filing as a limited liability company instead of a corporation, it didn’t have to list directors of the corporation. It only had to list an organizer — Scottsdale, Arizona lawyer Robert J. Rosepink. Rosepink filed the papers in New Mexico and listed the company’s principal address outside the state at 7373 North Scottsdale Rd, Suite E-200 in Scottsdale. That’s the address for Rosepink’s law firm.

GoDaddy says Rosepink is outside counsel for the company.

He may have run in the same circles as GoDaddy CEO Bob Parsons in Scottsdale. Both Rosepink and Parsons donated to Jon Kyl’s campaign for U.S. senate.

Earlier this year, Rosepink was indicted on 102 counts by the Arizona Attorney General office for his part in a concert promotion investment scheme. Rosepink allegedly earned nearly $1 million in fees for recruiting investors in what The Arizona Republic labeled a Ponzi scheme. [UPDATE: 12/17/08: In an interview with Parsons on his internet radio show today, Parsons told me that Rosepink was exonerated on all charges. Additionally, he says that Rosepink was merely outside counsel for the company.] [UPDATE 4/3/09: Apparently Rosepink was not exonerated on all charges as Parson said. The Arizona Republic reports today that Rosepink struck a plea bargain with prosecutors and plead guilty to four counts of solicitation or sale of unregistered securities.] 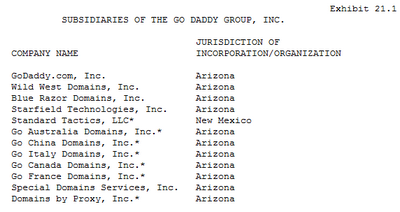 Because GoDaddy.com is itself a subsidiary of The Go Daddy Group, the domain registrar could technically say it did not warehouse domain names.

How it Works
GoDaddy is able to determine potential traffic to its customers’ expired domains. When a domain expires, GoDaddy places a parking page with paid advertising on the domain to count traffic. This also gives the company the ability to measure potential revenue. If a domain gets lots of traffic, GoDaddy places a higher starting bid on the domain when it is subsequently auctioned on TDNAM. GoDaddy also discloses estimated traffic to potential buyers. If a high traffic domain doesn’t sell at TDNAM, it is often transferred to Standard Tactics.

Standard Tactics makes money from the domains by placing parked pages on them. It sometimes lists the domains for sale on TDNAM at fixed prices, creating another opportunity to profit.

When Standard Tactics takes over a domain, it typically uses Domains By Proxy’s whois privacy service to hide its identity. There are a couple reasons Standard Tactics may do this. First, it hides the fact that a Go Daddy company owns domains its customers originally registered. This comes in handy when a customer merely forgets to renew a domain and later wants to re-acquire it. It also allows GoDaddy to tell customers that it doesn’t own the domains. Second, and perhaps more importantly, it hides that Standard Tactics’ portfolio includes a number of unsavory domain names including trademarks.

One way to uncover the name of a domain owner that uses whois privacy is to file for arbitration under ICANN’s Uniform Domain Name Dispute Resolution Policy (UDRP). Whois privacy services are required to disclose the owner’s name when an arbitration is filed. Standard Tactics has been on the losing end of a number of arbitration cases, including for the domains Ambian.org, buy-ambien-now.com, cheapest-ambien.net, JunoDSL.com, and PorschePartSite. It’s especially ironic that Standard Tactics owns prescription drug names since GoDaddy touts its lobbying efforts at the U.S. Congress to stomp out online prescription drug fraud. When I asked Camille Ede, Director of Domain Services at GoDaddy, about the company’s ownership of pharmacy and trademark domains, she said the accusation that the company owned such domains was false. Records at the arbitration companies prove otherwise. In fact, in one UDRP case a Standard Tactics representative asked complainant Sanofi-aventis, a pharmaceutical company in France, to close the arbitration request and that it would transfer the domain automatically:

We are aware of the domain dispute that has been filed on this domain. This domain was purchased in a bulk backorder. We do not support trademark infringement. We would like to transfer this domain to you at no cost you.

You will have to contact WIPO to close the dispute before I will be allowed to transfer the domain to you.

Please feel free to contact me with any questions.

In a follow up to my questioning, Ede wrote:

We by no means meant to mislead you about trademarks. We are NOT saying Standard Tactics doesn’t own a variety of names in a variety of different contexts, but disagreed with your characterization. Go Daddy treats all parked pages in the same way. If the trademark holder contacts DBP, asking us to remove…we remove it.

Standard Tactics Today
It’s clear that GoDaddy has taken a number of steps, including setting up a subsidiary in a different state, to cover its tracks warehousing domain names. GoDaddy has over 30 million domains registered, and a quick look at TDNAM shows a number of high traffic domains being auctioned off every day. One source said the company receives millions of hits a week on its Standard Tactics domains.

For a number of years, traffic aggregation, monetization and advertising has become an increasingly prevalent aspect of the domain name industry.

As the world’s largest registrar, we felt it was important for us to understand trends and developments in this industry. As a result, we created Standard Tactics as a research group.

All names in Standard Tactics are presented to the public for purchase in TDNAM. We do not withhold these names from TDNAM. There are relatively few names with Standard Tactics and there is randomness built in to the process in order to provide sample types representing all domain characteristics. By comparison, domain aggregators have 100’s of 1000’s of domain names.

Furthermore, Standard Tactic’s web page states that the company buys and sells domain names, that it may own trademarks as a result of bulk purchases, and refers interested buyers to TDNAM.

A phone number for Standard Tactics, found on the whois record for a .us domain name owned by the company (.us domains cannot use whois privacy), has a New Mexico phone number. A Call to the number is answered by a recording that asks you to wait for a representative, and then sends you straight to voicemail. A fax number on the same record is in the Phoenix/Scottsdale area.

[This story was edited at 2:18 PM CDT on Wednesday, 12/3/08 to include Ede’s response to denying that the company owns trademark and pharmaceutical names.]

What GoDaddy’s acquisition of Uniregistry means for domain investors