An update to the ongoing saga over BME.com. 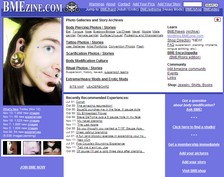 BMEzine has filed a response to Gregory Ricks’ lawsuit over the domain name BME.com. Here’s a quick history:

-In August, Gregory Ricks lost the domain name BME.com in a WIPO decision under UDRP. Although it is a generic three character domain name, he had a picture and ads related to tattoos and body modification. There is a popular web site called BMEzine.com about tattoos, body modification, etc. that filed the UDRP action.

-BMEzine alleges that it agreed to purchase BME.com from Ricks prior to filing the UDRP, but then Ricks backed out and raised the price twice.

-BMEzine alleges that Gee Whiz Domains, a privacy service that was visible as the whois for BME.com, is the alter ego of Ricks. (The whois currently shows Gregory Ricks’ actual contact information.) The response lists trademark typo domain names that BMEzine believes are owned by Ricks through Gee Whiz Domains, including yahooemai.com, msnnb.com, officedepo.com and cnnmmoney.com.

Of course, the domain name BME.com by itself doesn’t infringe any trademarks. It was Ricks’ use of the domain to show ads for body piercing, tattoos, etc. that landed him in hot water. Odds are Ricks had never heard of BMEzine when he registered the domain; it was just another three letter domain acquisition. It’s possible, although I’m unsure, that he never optimized the domain himself and it was done automatically. The domain currently goes to a generic TrafficZ parked page, so it no longer infringes in my opinion. But “no longer” doesn’t matter; the lawsuit is about the period of time that the domain allegedly infringed on the BME brand.

[Please note: your comments are welcome, but any comment containing profanity will be deleted.]