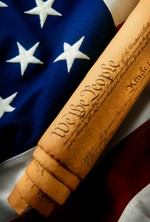 In a case decided at National Arbitration Forum, the panel found by a narrow margin that We The People, L.L.C. didn’t have a trademark in the term “We the People”, but only in the term in addition to a drawing. This is not surprising given that there are many companies with “We the People” trademarks, and it is a generic term which comprises the first three words of the preamble to the United States Constitution.

But because the issue of the domain being identical or confusingly similar to the trademark was a gray area, the panel decided to review if the other two qualifications for winning a UDRP were met: that the registrant has no rights or legitimate interests in the domain and that it was registered in bad faith. In both instances the panel found in the registrant’s favor.

Part of the complainant’s case was based on pay-per-click ads on the domain’s “coming soon” page that related to legal filing services and were competitive to We The People, L.L.C. However, these ads were placed by Network Solutions without the respondent’s knowledge and later removed at his request. Although the panel realized this, the respondent did have to back up his claim and go through the pain of asking Network Solutions to not profit off of his domain name.

The respondent asked for a finding of reverse domain name hijacking but the panel declined:

the Panel’s view is that the Complainant may well have genuinely felt that what it saw as the similarity between the domain name and the word elements of its trademark and the presence of the promotional links on the website justified making the Complaint. In those circumstances, the Panel in the exercise of its discretion does not propose to make a finding of reverse domain name hijacking.