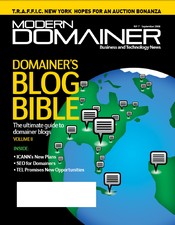 The September issue of Modern Domainer magazine will start shipping Monday, and this issue is a monster at over 125 pages.

The main feature is the second in the two-part series “Domainer’s Blog Bible”, which includes selected posts from Domain Name Wire. I’m happy with the selections Modern Domainer chose as it will re-introduce some topics that haven’t been discussed much lately. Please be sure to read the date below each article to understand what we were discussing at the time.

Other articles in this issue include: