Earlier this month Ron Jackson posted about an interesting session at Search Engine Strategies’ San Jose Show, taking place August 18-22. The session, titled “Mobile SEO: Death of the ‘.mobi'”, suggests that web developers shouldn’t create a mobile version of their web sites. Instead, they should make their “one web” site work across traditional and mobile platforms.

So when SES asked me if there was anyone presenting at the show that I’d like to interview, I quickly jumped on the opportunity to get some answers from one of the speakers on the panel, Cindy Krum of Blue Moon Works, Inc. (OK, so first I asked to talk to Google but that didn’t go anywhere 🙂 )

Regardless of whether you think .mobi has a future or not, Krum provides a compelling argument that designing a mobile-only web site is shortsighted, and companies should instead focus on making their main web site mobile-friendly.

Domain Name Wire: Why do you think .mobi isn’t necessary?

Krum: I have always been philosophically against device-specific TLDs because I believe that they are short sited, and fly in the face of the inherent value of the web. The web is an invisible repository of information, that should be the same, regardless of where you are accessing it from or what type of device you are accessing it with. The only truly scalable option is that sites be device independent, otherwise we will have to come up with a new TLD and a new website every time another web-enabled device comes onto the market.

That being said, I don’t think .mobi is never necessary; but I am convinced that .mobis have a limited usefulness which is quickly diminishing, as mobile browsers and mobile data delivery improve. There may still be a few instances where a .mobi is desirable, but for the most part you would be better off making your existing website work on mobile phones. In the same way that a .com domain is a stronger alternative to a .net or .biz domain, it is also stronger than a .mobi. It is the default in peoples minds, and they will have a hard time remembering anything else.

In many cases, I actually think the .mobi domain is not only unnecessary, but possibly detrimental to a the long term value of a brand and a website. When you create a second website for the same brand, you risk confusing users, especially if the site has a different navigational structure or different content. You also split traffic and links going to the site but double your effort, in terms of marketing and maintaining the two sites. I truly believe that the money companies are spending now to create, market and maintain a totally new .mobi site will all be in vain very soon, when mobile browsing and data delivery rival the traditional experience. We have actually spoken with the directors of huge mobile sites, who have told us that they wished they had never created a separate mobile site and that it would have been much cheaper and easier for them to make the existing site work on mobile than create an entirely different site.

Domain Name Wire: The iPhone presents a “one web” premise. But the iPhone still has only a small sliver of the worldwide cell phone market. Wouldn’t optimizing for “one web” at this point be like optimizing for FireFox when most of your users still use Internet Explorer?

Krum: It depends on your goals. If you have a very near-term goal, perhaps 2-6 months, and expect to return little or no value from the site after that period, then a separate mobile website might be ok. That is especially true if you have a huge budget to fund an extensive marketing campaign to drive traffic to the new website. Unfortunately though, optimization is a long-term process, so it is probably less valuable to â€˜optimize’ sites that are created for short-term use, and more valuable to market the hell out of them, and create a short-term traffic blitz.

If you have longer-term goals, then the answer is very different. It is important to note that iPhone users are the second most active users of mobile web in the United Sates, (just behind RAZR users); they are five times more likely to access the mobile web than users on any other phone. This is no-doubt because the user experience is so vastly improved on the iPhone. With that in mind, you have to understand that LOTS of mobile carriers and handset designers are launching phones with browsing experiences that rival that of the iPhone. We are about to hit critical mass in the mobile world. At this point, optimizing for â€˜one web,’ is just a good business decision; it’s where the world is going, and soon enough, people aren’t going to need a limited â€˜mobile’ version of your site, regardless of what phone they are using.

Domain Name Wire: Zagat promotes its Zagat.mobi site. It’s even featured in a commercial for the iPhone. Does this conflict with your message of “one web”. 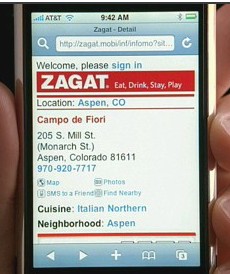 Krum: A pointed question, but I like it! I don’t think it necessarily conflicts with MY message, but I do think it is in direct conflict with the message that Apple is trying to promote with the iPhone about â€˜one web.’ I would hope that Zagat.com works just as well on an iPhone as Zagat.mobi does, since the â€˜one web’ thing is supposed to be their unique selling proposition. I don’t own an iPhone, so I’ll have to check it out and see. I honestly hadn’t seen the commercial, but it creates some serious cognitive dissonance, and that cracks me up. My guess is that Zagat started developing their .mobi very early in the game, before everyone realized that the separate site wasn’t going to be necessary in the long-term. Now that they have already put the time and money into creating it, they will probably continue to maintain it, until it becomes totally obsolete, or just not worth the effort.

Domain Name Wire: Can you give an example of a company using the “one web” approach in their web site?

Krum: Anyone who does not have a separate mobile website is defacto taking my advice, which makes me feel pretty good! The more important question is â€˜who is really leveraging the options available to make one site work really well on both traditional and mobile computers,’ and that is a harder questions. There are a lot of ways you can update your existing website to work well in both rendering situations, but none of them are fool-proof yet.

You can draw a parallel between where we are now with the mobile web, and where we were 8-10 years ago with the traditional web. Between 1998 and 2000 was when the different web browsers really began to render things in a similar, predictable way, and that is what we are seeing on the mobile web now. My advice, if you are updating your existing website to work on mobile devices is to try to create a good mobile experience on a lot of different devices, rather than trying to create the same experience on a lot of different phones. Mobile phones and browsers are changing so rapidly that it really doesn’t make sense to design to a specific handset or browser. Instead, follow XHTML development standards, test and tweak on a variety of different devices, and expect the mobile experience to improve rapidly in the next year or two.

One of the best example I have seen is Wikipedia. They are doing a great job of using CSS to guide how the page will render in a variety of different situations. In general though, the people who are actually doing a really good job optimizing the .com’s are the people who have tried the other options and now see the long-term branding value in just using the .com. A blended approach is still appropriate, so as long as The AccuWeather.com is great for mobile though they also have a WAP and a Wireless subdomain. Twitter is also doing a great job without a .mobi, though they do have a mobile sub-domain, which is not totally inline with what I would recommend.

.Mobi Domain Names Must Be Short to Succeed

Pinky Brand Discusses the Past, Present, and Future of .Mobi