Despite a turbulent year, SnapNames is still #1 for expired domains.

37% of respondents in Domain Name Wire’s third annual domain survey use SnapNames more often than other expired domain catching services. This is the third year in a row that SnapNames had led the charts, despite a very challenging year for the service.

After being acquired by Oversee.net, SnapNames lost key registrars Network Solutions and eNom. The two registrars formed a competing drop catcher called NameJet. The drop in premium inventory may be part of the reason SnapNames fell from 47% of the vote in 2007 to 37% this year.

There are two new services on the charts this year — and one no longer on the list. eNom’s ClubDrop ceased operations as it moved to the NameJet platform. NameJet is used most often by 15% of the domain industry, according to the survey of 841 people. Afternic also joined the expired domain club with domains dropping from Melbourne IT. Afternic took 8% of the vote.

The graph below shows the complete results for 2008. Numbers from prior years do not equal 100% because defunct drop catchers aren’t included. 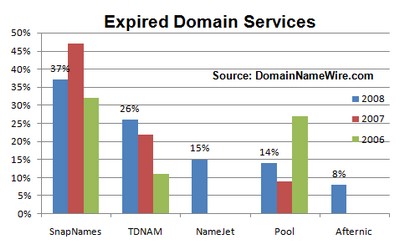