The University of Texas System (my alma mater) has filed an arbitration under UDRP to obtain the domain name UniversityofTexas.com. The arbitration was filed with National Arbitration Forum on April 11.

According to Compete.com statistics, the domain receives about 2,000 unique visitors per month, with a spike in late August/early September when new students arrive on campus:

The domain’s Alexa rating is about seven million.

The domain is owned by a company called Global Access based in Isle of Man. DomainTools reports that the company owns about 861 domain names. The domain is parked at HitFarm and includes advertising links to “University of Texas at Austin”, “Texas Longhorns”, and “Texas Colleges”. 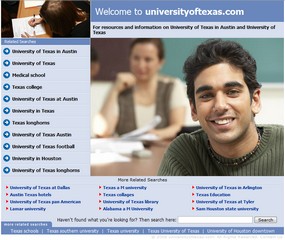