At long last, it appears access to Overture data may be gone.

In January I wrote about how Yahoo’s updated search marketing platform would mean the end of “Overture Scores”. (See The Death of Overture). After nine months, it appears the nail if finally in the coffin.

Overture Scores represent the amount of times a keyword or domain is searched in the Yahoo! (NASDAQ: YHOO) network. For example, a keyword may show a score of 1,336, meaning the term was searched 1,336 times during the month. An “Overture+Extension” score means the keyword plus domain extension. So the “Overture+Extension” score for Domain.com may be 2,750, meaning that many people typed “domain.com” into their search box during the month.

For the past nine months, the only data available on Overture was from January. Outdated, yes. But it was available. Now it appears the database may have been cleansed and access to the data may be gone forever.

A search for “mortage” returned this (lack of) result: 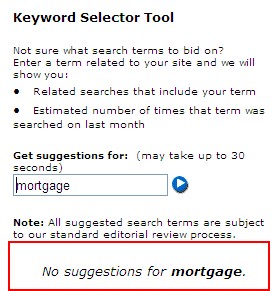 It looks like the people who got their hands on Domain Guru’s Overture data may have made a very wise investment.

Over the years, Overture scores were deeply relied upon by the domaining community when buying a domain. The scores became so important the people started to game the system. For example, someone with some-bad-domain.com would search for that domain many times over a couple months, then advertise the domain as having an Overture+Ext score of 45. A score that high means the domain probably gets several hundred type-ins per month. Common sense told expert domainers that a score of 45 for some-bad-domain.com wasn’t accurate, but rookie domainers were frequently duped.

There are alternatives to Overture scores, but none of them are as robust. WordTracker is perhaps the most popular alternative, and if offers a free trial.