Sedo knows how to treat its customers well. Last week, the domain name aftermarket and parking company treated over 50 of its SedoPro customers to a vacation at the Mohonk Mountain House in New Paltz, New York. Attendees paid only $149 per night, a fraction of the $500 room rate, and were treated to one heck of a time. Those invited included SedoPro customers (Sedo’s professional domain name parking service), some of the company’s biggest buyers and sellers, and select other domain professionals.

The group met Sunday afternoon at the Grand Hyatt in New York City, where the TRAFFIC conference kicked off a few days later. Around 3PM we boarded three limo buses, each stocked with a cooler of beer, and headed off on the two hour journey to the Mohonk resort. With so many languages being spoken, each bus resembled a UN convention. Visitors represented Germany, the United Kingdom, and Australia, among others. 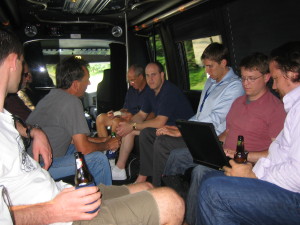 The bus ride from NYC to Mohonk

Upon arrival, we were ushered to our rooms to relax for an hour before heading to a lobster bake. Mohonk’s rooms are incredible, with beautiful views of the hills and lake. 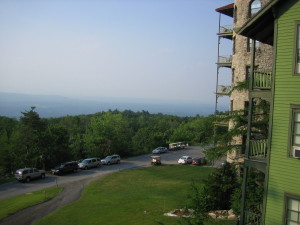 A room with a view 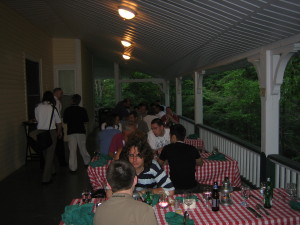 Chowing down with fellow domainers.

The event gave Sedo a captive audience to which it could sell why it was best, but Sedo decided to make this event a vacation, not a sales pitch. There were few educational sessions planned until the third day. Even then, Sedo shortened most of its sessions because the weather was so nice. Most days the temperature sat in the 70s.

Monday morning we were given the option of going on a hike, visiting the spa for a massage, playing golf, or hitting around the tennis ball. About 30 people opted for the hike, including myself. We were given the option to go a leisurely walk, a brisk hike, or a rock scramble. Myself and four other domainers opted for the more rigourous option, and ascended a couple hundred feet in the air by navigating boulders, caves, and a few tight spots (one dubbed the “lemon squeeze”). 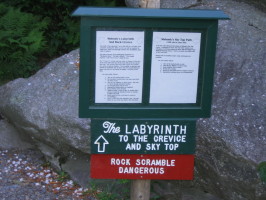 Entrance to the rock scramble, called The Labyrinth 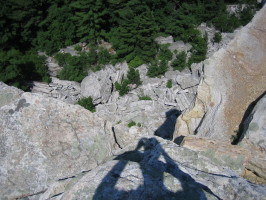 Don’t look down! That would be an uncomfortable 200 foot drop. 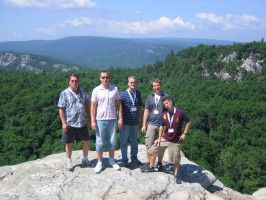 And they say domainers never get out from in front of the computer.

After the morning events, everyone gathered for a barbeque and listened to Phil Corwin of Internet Commerce Association tell us about some of the dangers ahead for the domain industry. The afternoon included an optional networking event and a game of domainer jeopardy. I opted for the speed networking and got to meet a lot of people I knew of but never met in person. 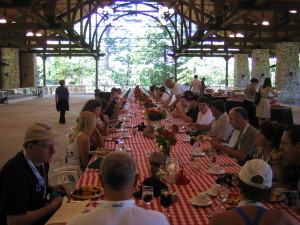 Barbeque in the mountains

Monday evening, Sedo treated us to a formal dinner followed by a great party. The party included lots of games, including two huge big screens connected to Nintendo Wii consoles. Unfortunately, nature got the best of me and I was sick by the time the party started. I only attended for a few minutes but everyone who attended said they had a great time.

Tuesday included several brief educational sessions, including information about Sedo’s acquisition of Great Domains. The sessions ended in time to relax outside for another hour and enjoy the crisp mountain breeze.

Of all of the planning Sedo did, the best job was planning the weather.

It was great putting faces to the names of some of Sedo’s account managers and marketers. They are a professional group and add legitimacy to this industry. Bravo to Sedo for planning a great conference.